A is for Algorithm

An algorithm is a step-by-step list of instructions that need to be followed to solve a problem. Systems music and algorithmic composition use such sets of instructions to make music with minimal human intervention.

The AAAI is a nonprofit scientific society that promotes research in, and responsible use of, artificial intelligence. Their website contains lots of resources including on using Artificial Intelligence in creative works of art.

B is for Burrows (Jonathan) and Fargio (Matteo)

Choreographer Jonathan Burrows and composer Matteo Fargion often use scores in their duets, which are often read live during the piece (rather then remembered). For example one of the scores use in Speaking Dance (2006) uses a simple pattern based on the permutations of three elements:

C is for Cohen, Harold

Harold Cohen is the creator of AARON, the world’s first cybernetic artist “an artificially intelligent system that composes its own paintings”. But Cohen doesn’t believe AARON is creative “I think creativity has to involve self-modification in the sense that the creative act has to leave the creator with a different world model than it had before…having a brain and having a life are two different things.” (Source: Studio 360)

D is for the Department of Computing of Imperial College London.

The Department of Computing of Imperial College London is home to Simon Colton, an Artificial Intelligence researcher, specialising in questions of computational creativity.

E is for Evolutionary Art

In evolutionary art, a computer randomly generates multiple artworks and then evaluates each one for its aesthetic value. Those works rated most highly have the highest chance of remaining in the ‘population’ of art works.

F is for Forsythe (William)

Choreographer William Forsythe is a famous example of someone using algorithms in dance-making to develop and modify movement phrases. In his partially improvised ballet Eidos:Telos, dancers interpret algorithms (that for example change the space use in a sequence, shorten a sequence or run a sequence backwards) to modify set phrases. (In Buckwalte, M. 2010 Composing While Dancing: An Improviser’s Companion)

G is for Gough (Matthew)

Matthew Gough is a senior Lecturer in Dance at The University of Northampton. In his paper ‘Towards Computer Generated Choreography‘ he argued that

“Artificially creative technologies developed for algorithmic art and music have yet to make an impact on the dance making process other than to provide visual or aural accompaniment. We believe that not only can the choreographic process be simulated and automated, but that such a simulation would present a viable alternative to more traditional methods of dance composition.”

H is for Hamish MacPherson and Martine Painter

Our piece Meeting Place is a duet which plays with visually unfolding an algorithmic formula. The algorithm was developed as a way of combining two separate sequences of movement performed by two people. In the first phase of the algorithm each person has their own sequence which is built up one move at a time. The two people perform their moves alternately, and repeat their sequences – which grow by one move with each repetition – until they are complete (see video below). (Read more)

I is for I-Ching

“Some people seem to think that it is inhuman and mechanistic to toss pennies in creating a dance instead of chewing the nails or beating the head against a wall or thumbing through old notebooks for ideas.  But the feeling I have when I compose in this way is that I am in touch with a natural resource far greater than my own personal inventiveness could ever be, much more universally human than the particular habits of my own practice, and organically rising out of common pools of motor impulses.”

(Merce Cunningham The Impermanent Art p71 in Stanford Presidential Lectures in Humanities and the Arts).

J is for Johnson (Tom)

Tom Johnson is an American minimalist composer whose work is often based simply on mathematical and logical processes.

Although people often scoff that modern art could be made by a child or an animal, it appears that people can detect the hand of an artist

Angelina Hawley-Dolan of Boston College [designed] a fun experiment that played with her volunteers’ expectations of the pieces they were seeing. Their task was simple. The volunteers viewed pairs of paintings – either the creations of famous abstract artists or the doodles of amateurs, infants, chimps and elephants. Then they had to judge which they preferred. A third of the paintings were given no captions, while the rest were labelled. The twist was that sometimes the labels were mixed up, so that the volunteers might think they were viewing a chimp’s messy brushstrokes when they were actually seeing an expressionist piece by Mark Rothko. Some sceptics might argue that it is impossible to tell the difference – but in each set of trials, the volunteers generally preferred the work of the well-accepted human artists, even when they believed it was by an animal or a child

Computer scientists Lior Shamir and Jane Tarakhovsky of Lawrence Technological University developed an algorithm that demonstrates computers are able to “understand” art in a fashion very similar to how art historians perform their analysis, mimicking the perception of expert art critiques.

M is for Mortal Engine

“That’s what I’m doing a lot; reviewing algorithms that have been made for industrial uses in analysing objects and movement. I’m kind of abusing them for something aesthetical, a visual output of a new form — I reuse algorithms for something a little bit more useless.”

N is for Nine Bells

Nine Bells (1979) is a work by composer Tom Johnson although as he himself says “in retrospect, there was not very much composing in…Nine Bells…

[A]s I walked around my bells, the logic was more geometric than arithmetic. It is often easier to see logic than to hear it, and easier to visualize the rotations around a circle than to calculate a note sequence, and I managed to find a strict and audible logic for each of the nine movements. Later, when performing this piece, I sometimes had a very strange sensation. As I played the first note, stepped off on my left foot, and began the first cycle, the experience was very different from that of playing any other kind of music. It was the feeling of beginning something completely inevitable, something I could not stop, and it was clear that my feet were going to carry me on through the sequence, even if my memory failed, or if fatigue set in, or if the audience all walked out. I was a kind of puppet being driven by some inevitable geometric- musical logic that had little to do with my own will power. One could say that I had become merely a machine, but it was a very agreeable experience.”

O is for The Open Ended Group

P is for Pascal’s Triangle

Pascal’s triangle (named after the French mathematician, Blaise Pascal) is a famous number pattern in mathematics. To build the triangle, start with ‘1’ at the top, then continue placing numbers below it in a triangular pattern. Each number is just the two numbers above it added together (except for the edges, which are all ‘1’): 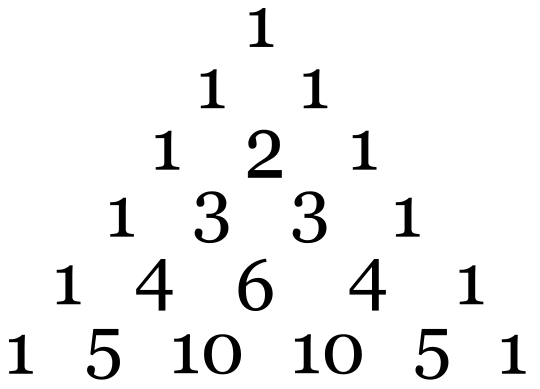 As shown in the video below, when making Meeting Place, we used the first four rows of Pascal’s Triangle as a compositional device, to structure movements with 1, 2 and 3 elements (we also used 4 and 6 elements later on). (Read more)

Q is for Questions

R is for Romanian Folk Dance

In a series of videos , people at Sapientia University in Romania demonstrate how different sorting algorithms work with numbered people dancing around and arranging themselves from least to greatest.

S is for Stochastic Painting

Stochastic is “a technical word in mathematics and physics, representing completely random assemblages or process. This, stochastic paintings are those in which shapes and/or colours are structured randomly” (Whipple, F. L. 1968. ‘Stochastic Painting‘ in Leonardo, Vol. 1, No. 1, Jan., 1968. MIT Press)

T is for Tresset (Patrick)

Patrick Tresset is a French artist/scientist who in 2012 created 6 Robots Named Paul, each programmed to replicate his own drawing style but each with their particular style. (Source: Time Out)

U is for University College of London

Semir Zeki of University College London is the founder of the emerging discipline called neuroaesthetics.

“The idea was to bring scientific objectivity to the study of art, in an attempt to find neurological bases for the techniques that artists have perfected over the years. It has already offered insights into many masterpieces. The blurred imagery of Impressionist paintings seems to tickle the brain’s amygdala, for instance, which is geared towards detecting threats in the fuzzy rings of our peripheral vision. Since the amygdala plays a crucial role in our feelings and emotions, that finding might explain why many people find these pieces so moving.”

V is for Visible Sound

The Interactive Robotic Painting Machine was created by artist and composer Benjamin Grosser and uses artificial intelligence to paint based on the sounds it hears.

W is for Wayne McGregor

‘R:Dance‘ is a branch of choreographer Wayne McGregor ‘s company Random Dance. Its aims is “To enhance and generate new understandings of choreographic practice by bringing the knowledge of dance into conjunction with other fields such as cognitive science, biology and technology research, social science and philosophy.”

X is for Xenakis (Iannis)

Iannis Xenakis pioneered the use of mathematical models in music such as applications of set theory, stochastic processes and game theory and was also an important influence on the development of electronic and computer music.

Y is for Youth (Sonic)

one simply lets a microphone swing over a loudspeaker, allowing periodic feedback sounds to be produced however they will. This seems to me to be a particularly good example of a music that was found rather than composed, and if one sets it up well, the results can be as wonderful as any of the music that Reich later composed.

Z is for Zagreb

In 2011, Zagreb was home to an international symposium Algorithmic Reflections of Choreography: From Choreography to Software and Back presenting cutting-edge approaches to using software tools in choreographic work. (Watch videos and interviews from the event)