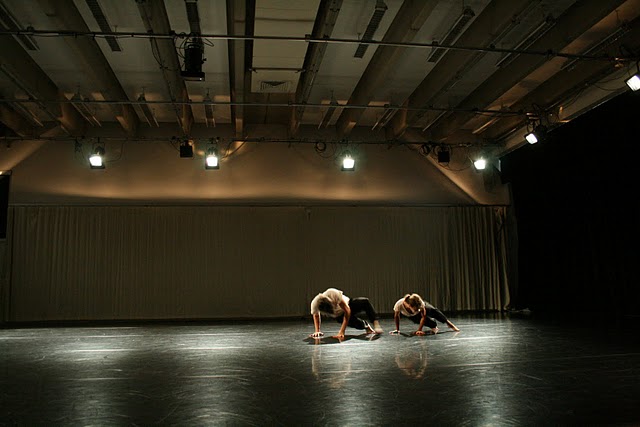 ‘Meeting Place’ is a duet which plays with visually unfolding an algorithmic formula. As the algorithm evolves, a curiously intimate and sometimes comic relationship between two human beings emerges.

Hamish and Martine premiered ‘Meeting Place’ on 10 January 2012 at The Place, London as part of Resolution!, a season of dance works by emerging choreographers:

An algorithmic formula is behind Hamish MacPherson and Martine Painter’s Meeting Place. You know, algorithms, like the complex formulae that investment banks’ computers use to drive us into financial meltdown. This one, however, has a far more benign and entertaining purpose, and results in a moderately charming game of repetition, accumulation and amusing absurdity. As a pair of performers, MacPherson and Painter have a nice connection and they string together simple units of movement – an arm swing, a raised leg, a vocal yelp – in a manner that manages to keep our attention for almost the full twenty minutes. Some genuine laughs out loud and a nice visible logic at play.

Mathematics and dance seem to be unlikely bedfellows, yet Hamish MacPherson and Martine Painter’s duet has found a Meeting Place for the two. The piece reflected a thoroughly considered approach, building up a number of simple movements in a formulaic way. In spite of the seemingly rigid structure it is based on, Meeting Place had a certain refreshing, unrehearsed quality. The choreographers-turned-performers were delightfully unpredictable as they engaged in playful dialogue with each other, boldly sustaining moments of stillness and amplifying the humour in the occasional and apparently coincidental moments with their deadpan faces and absolute conviction.

(…) As the duo danced, they gradually deviated from the formula, letting the algorithm descend into chaos before building it back up again.  Surprisingly, the dance looked unrehearsed and nearly improvised, as if it evolved naturally on stage. Even though their movements were largely predetermined and their faces carefully kept blank, the dancers often looked like they were responding to each other and having a conversation. The audience was left with a sense that, no matter how automated, dance is still a human endeavour.

Meeting Place was also performed on 19 July 2012 at the Hotel Elephant Gallery.

You can see more content about Meeting Place on our blog, including trailers and posts about our influences and choreography methods.